Imagine my glee when I realised that the building works that have been taking place for the last four and a half months, not far from my front door in the old Parkway tanning salon, were on behalf of a greengrocers. Yes, that’s right, a proper, old fashion greengrocers, with brown paper bags and everything.

Please excuse the rather local note of the post, but I am hopping with excitement at the knowledge that less than a minute away is a shop that sells everything I like to eat. (I just wish it had been open during the last three months of frantic cookery.)

Camden in North London is blessed with lots of places to do your greengrocery shopping, but few of them are independent, many are expensive, and none of them sell everything you might need.

Store-wise I head mostly to the huge Morrison’s supermarket, which does have an exceptionally wide range, including, in season, samphire, kohlrabi, chard and other esoterica, but it’s far from perfect. Sainsbury’s and the Co-op don’t move much beyond the basics, Marks & Spencer quality is wonderful but stock is limited and Not Cheap, and Whole Foods’ veg prices are just ludicrous.

Inverness Street Market is good, as is the stall opposite the tube where I buy a lot of soft fruit, but the quality isn’t always fantastic and it is a lottery as to what is available at either on any given day.

But my (and it is so going to be my) new greengrocers sells five types of carrot, eight types of onion, twelve types of tomato, thirteen apple varieties, three of cauliflower, three of beet, and every soft fruit you could need, from mangosteens to redcurrants (I know that out of season these are of limited appeal, but when you need to shoot a summer pudding in February, a redcurrant purveyor takes on god-like status).

And then there’s an entire wall of dried fruits, nuts and other cooking ingredients. 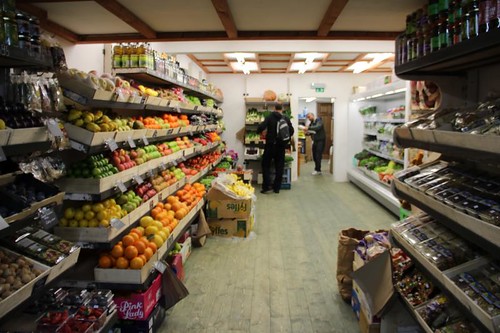 It’s no wonder that Mr Ottolenghi has already happily hopped in (the proud owner showed be a camera pic of him in situ). But, most joyfully, the prices are absolutely bang on. £1.25 for the perfectly ripe avocado I had for my lunch. 35p for a single duck egg. Sure you can buy an organic English cauliflower for £2.25 (and you should, they are delicious), but there is an imported one for half the price too. 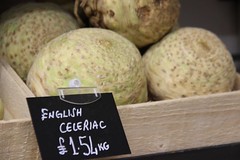 They are a sister operation to the wildly popular Clifton Greens in Maida Vale. Lucky old Camden getting them too.